To make Guns of Boom updates more polished, we’ve added a Public Test Server, where all the new features and mechanics get tested before being released for the main game. For general info on PTS and how it works - check out this link.

This changelog has the info on all the changes we want you to test in the current version of PTS, so make sure to check it out before heading into the test grounds, so you know what to keep an eye on.

Test the new stuff, and head over to our Discord to discuss all your experiences!

Welcome to the new launch of PTS! This time, we’ll test plenty of balance changes for a whole range of guns.

Developer Commentary: Right now the Porcupine is overpowered. To balance it, yet keep the weapon effective, we’ve only slightly adjusted the stats.

Developer Commentary: Reaper is a great shotgun with interesting mechanics, yet it needed some more damage to be competitive.

* Here and after, the changes in base damage are given for the maximum upgrade level. The changes proportionally apply to all previous upgrade levels.

Developer Commentary: Joker’s charge mechanics were unpredictable. We changed it up to increase the chance of charges firing and make them more predictable. Not to make it OP, we’ve reduced base damage and the increased damage from charges.

Developer Commentary: Due to changes in freeze effects, the slowdown effect is now 30% (the Freeze perk used to give 20% slowdown after the first hit, and 40% after the second hit).

Developer Commentary: The Avalanche had a very situational perk that wasn’t very useful most of the time. That’s why we completely overhauled it and added the Slowing Shot perk.

Developer Commentary: This change is due to the general buff of the Slowing Shot perk.

Developer Commentary: Wasp gives a ton of advantages. It’s great at short range, has a great rate of fire, and increases movement speed. The sum of these features made Wasp overpowered. That’s why we reduced the base damage and increased recoil.

Developer Commentary: Odin is a favorite gun among many players. Yet it lacked the damage to properly compete with other ARs.

Developer Commentary: Right now, Drifter’s Crossbow is one of the most powerful weapons in the game. A single body shot from a maxed-out crossbow does 2500 points of damage - that is the level of the most powerful shotguns in the game. However, Drifter’s Crossbow can deal that damage from almost any distance. We’ve changed its basic behavior, reduced the maximum range, and cut down the damage to the body(base damage) while buffing the damage to the head (critical damage). That'll make Drifter’s Crossbow a more skill-based weapon, while its headshots will still hurt like hell.

Developer Commentary: We fine-tuned Iceberg’s rate of fire, slightly increased its damage, and tweaked the freezing effects in line with the overhaul of Slowing Shot.

Developer Commentary: We believe that Jack Frost wasn’t effective enough, so we buffed it. Also, the Slowing Shot perk now works on it the same way it does on other guns.

That’s it for today. Make sure to share your feedback!

In this version, we have continued to work on the weapon classes. This time, changes have been made to shotguns and sniper rifles. Here's what's included in version 29.0:

Due to an imbalance caused by the reintroduced weapon readiness time parameter, we had to tweak the stats for the following shotguns:

We have changed the mechanics of interaction with the pistol. Now, in the settings, you can choose one of the modes – manual or automatic. In manual mode, the pistol works by tapping the button on the screen. In automatic mode, things work as usual. Also, now you can disable the pistol altogether.

Bear in mind that the following actions will interrupt the activation of the pistol when it’s in manual mode:

You will find the Workshop section in the game, where you can create or upgrade offensive and defensive consumables for a fee.

In this update, the visuals of a large number of weapons were significantly improved.

When you finish exploring all the new stuff on PTS, be sure to take our survey (you can open it directly from the game) and share your opinion with us! It helps us a lot in further development.

A whirlwind of high-speed old-school action, classic FPS versions of guns, and boosters to keep you on your toes – this is what Frenzy is! The new mode features new weapon types, significantly increased movement speed, and an experimental map created just for this test. Fights in the new mode happen in Free For All format, and there can be from 2 to 5 people in a single battle. The player who reaches 21 eliminations first or scores the most points during the 6-minute time limit becomes the winner!

Every gunslinger starts with 2000 Health Points, 18000 Armor Points, and the following loadout:

There are no offensive or defensive consumables in Frenzy mode.

Weapons on the map: 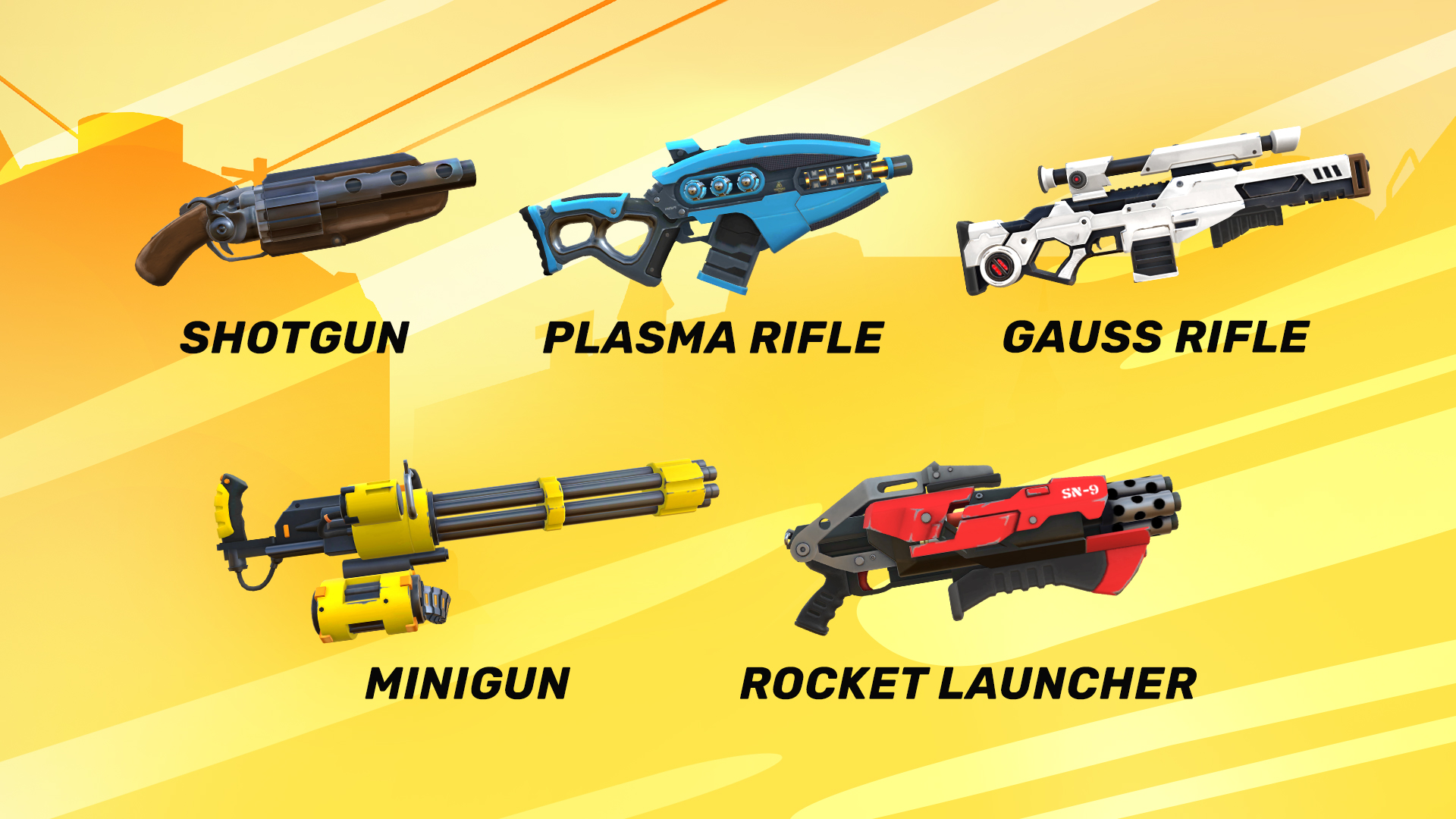 IMPORTANT: picking up armor boosters can increase your armor cap by 50% - up to 2700.

Claiming your well-deserved loot after a tough fight is something we all like. We’ve improved the animations and graphics in the reward window so you can thoroughly enjoy the process of unboxing your goodies.

Once you’re done playing on PTS, please take a survey, which can be accessed right in the game. Leave your feedback - it’s a great help for further development of Guns of Boom.

In this version, we’re fine-tuning the feel of Assault Rifles, and there are two key changes you’ll notice:

However, we’ve also made other changes, not related to Assault Rifles: 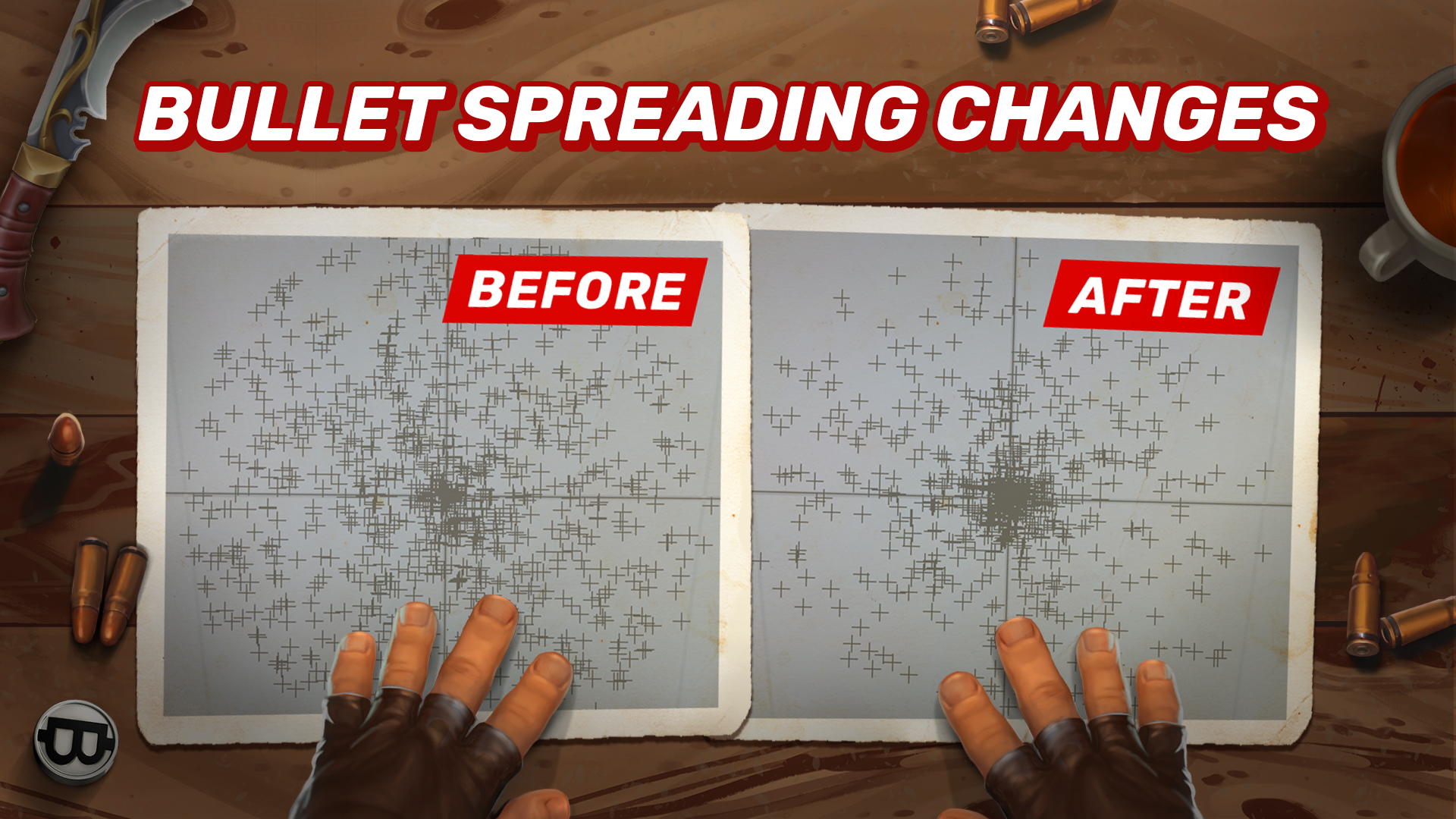 Weapon archetypes. We’re trying to make weapons more intuitive and predictable depending on their type, thus making some adjustments to all 4 primary gun types. From now on, distance does not affect damage, while recoil and bullet spread play a more important role in landing shots and thus dealing damage - this applies to all weapons. However, there are specific changes that happened to certain weapon types.

Developer commentary: Machine guns don’t get a lot of action these days, so these changes are aimed at making them the deadly long-range support weapons they should be. Make sure to check them out - they feel completely different!

Developer commentary: Shotgun damage will vary depending on how many pellets hit the target, and the closer you are to the enemy, the more chance you have to land them all for maximum efficiency. New crosshair and aiming features should help predict the pellet spread in battle.

Developer commentary: Almost all ARs had the aimed fire mode except these 4, so we decided to give all ARs this feature. We’ll leave the hip-fire-only mode for something like a cannon.

Developer commentary: Sniper rifles are long-range weapons, and they truly shine in scoped mode only. It’s not often that snipers use hip-fire mode, but we still decided to limit critical damage in this fire mode.

IMPORTANT: Some weapons like the Fortuna machine gun have special abilities that increase their base damage, so their stats in the arsenal should be considered as basic values, not final ones.

Duels. A new game mode, perfect for duking it out with another gunslinger and finally seeing who’s got the skills, and who needs to practice some more. It features a bunch of special compact maps where you’ll simply need to go head-to-head. The game continues until one of the gunslingers scores 5 eliminations or the 5-minute timer runs out.

Some changes also happened in the limitations of loadouts/specializations.

On October 8-12 we’ll hold the fifth PTS and here’s the stuff we want to test:

During testing, you may encounter different issues and bugs, not just the ones related to the current version. Don’t hesitate to report them – the more problems we detect and solve on PTS, the better the game experience will be for millions of Guns of Boom players. Don’t know how to report bugs properly? We’ve got a whole guide about it!