Back to news
Introducing the New Leagues 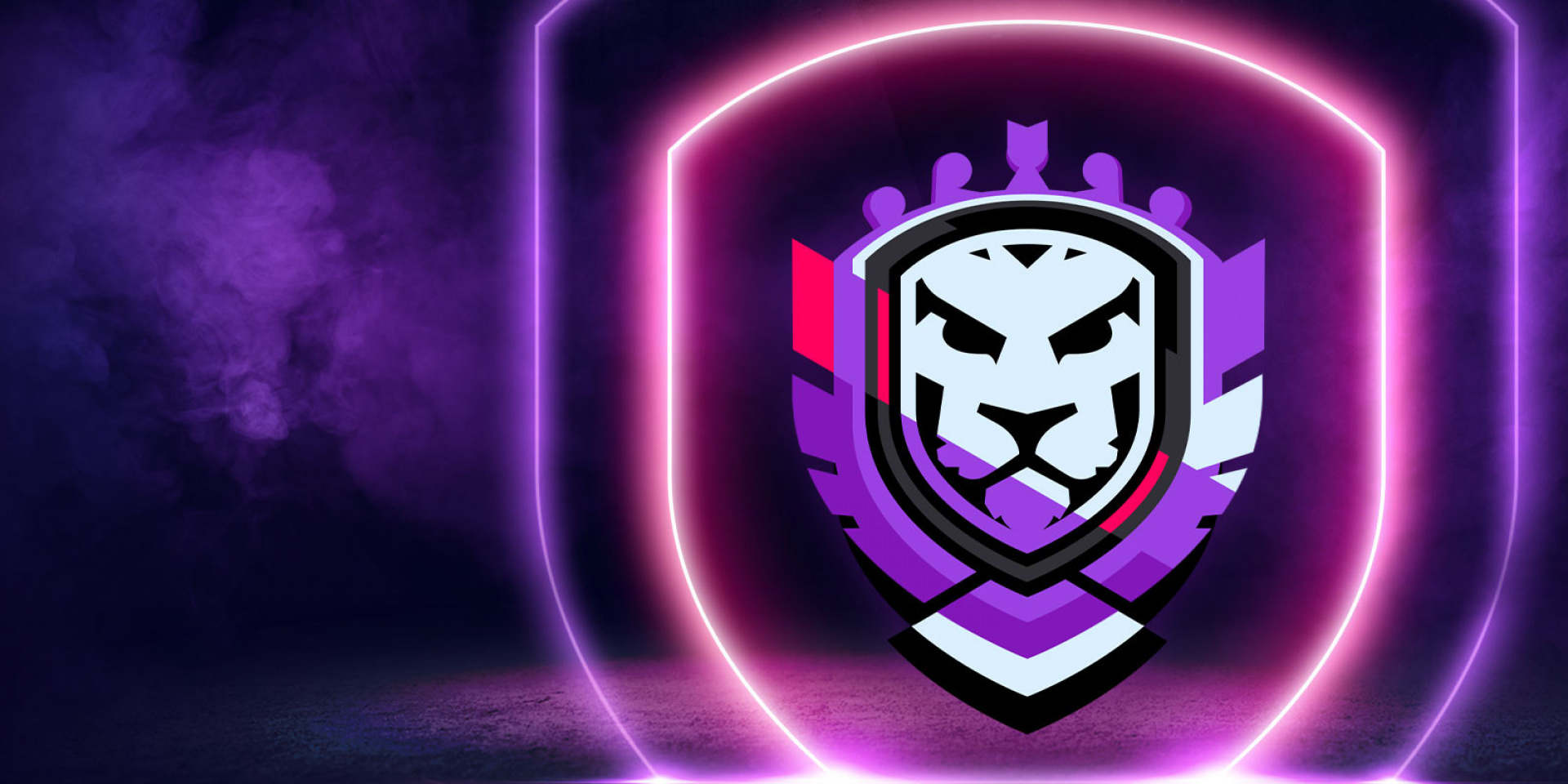 Hey everyone! You’ve long waited for this new feature, and we’re ready to deliver. It’s a whole new approach to advancing through the game that’ll enhance your Guns of Boom experience greatly! Soon the new league system will come into effect, and we’ve decided to make a thorough FAQ, so you have a better understanding of how this new feature works.

What are the new leagues?

It’s a system of advancing in the game that rewards battle mastery and shows how skilled you are.

Watch our short trailer to get the gist of the new system:

What’s happening with the old leagues?

The old system was not competitive and rewarding enough, and we’ve decided to change that. Here’s what’s going to happen:

Will this affect my profile statistics?

What kinds of leagues are there?

There are 3 leagues: Silver, Gold, and Platinum. Each of them (except for Platinum) has steps: Silver has 3 steps, Gold has 5 steps. Each time you advance to a new league, you get an insignia, every time you reach a new step, you get a case of rewards that include fragments of rare event weapons. The higher the league, the better the reward.

Keep in mind that Silver and Gold rewards are received instantly once you reach a new step or a new league, whereas Platinum rewards are only given out once the league is reset. 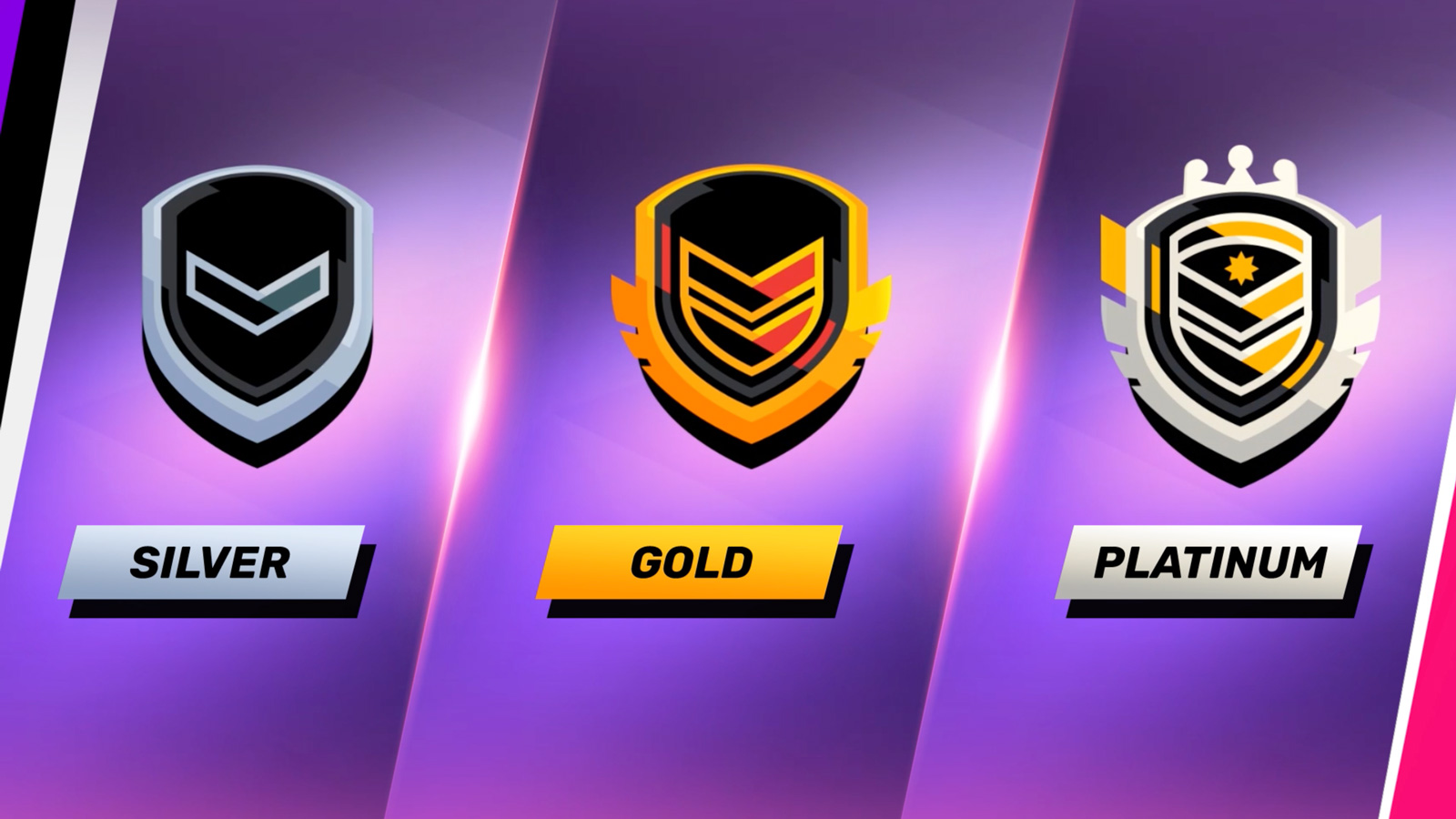 The first league, where all the new players start. Everyone begins at step 1 and climbs towards step 3. There are no penalties for losing games, you even get some rating points.

The league for advanced players. Players move from step 1 to step 5. The rewards for reaching new steps are better. Lost games do not give any rating points, but there are no penalties for losing.

The most hardcore league: every defeat in battle causes players to lose rating points, so the battles are truly heated. Instead of steps, this league has certain thresholds – Top-50%, 25%, 10%, Top-500 players.

This league has a unique reset mechanic. Every 2 weeks the ratings in all the Platinum league are reset to 30,000 rating points – the beginning of Platinum league (you cannot roll back to Gold once you enter Platinum). The players receive the rewards appropriate to their position in the ratings, and the Top-500 players are placed in the Hall of Fame.

This is an unbelievably cool list to be a part of. If you’ve made it, it means you’re one of the meanest and most dangerous gunslingers out there. All players who’re in the Top-500 at the moment the league resets, get a place in the Hall of Fame. You also get a badge in your profile if you’re one of the Top-500 players before the reset.

This list is formed after every reset. It’s a unique rating table that displays the Top-500 players of the previous Platinum league. Your profile will always show how many times you made this list.

Those ratings are now reset once every 2 weeks. Keep fighting for your clan to keep it at the top. Defeat doesn’t reduce your clan’s rating. If a player leaves a clan, the rating that player gained, will stay in the clan.

What about mixed teams?

Let’s say you’re Gold 1, and there are also Gold 4 and Gold 5 players on your team. Who will you match against? Well, the matchmaking system always finds opponents for the player with the HIGHEST LEAGUE, so in our example, you can be matched against Gold 5. Rating points for each battle will be awarded according to your current league.

How many rating points will I gain and lose in matches in different leagues?

Here’s a comprehensible table that shows how many points you can win or lose. For instance, if you take the 1st place in a winning team while being in Gold 2, you’ll get 30 rating points. 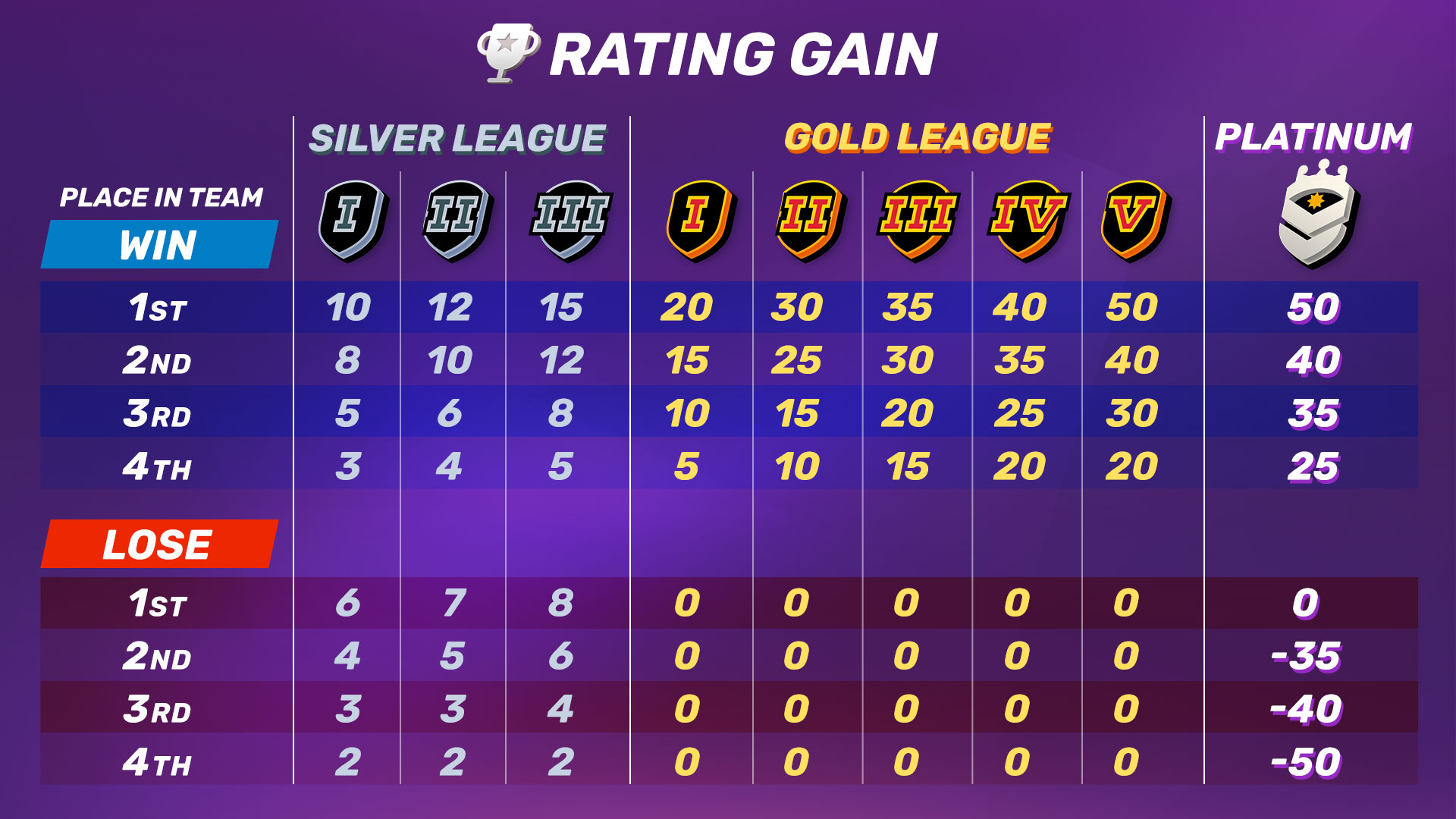 High-level weapons and their upgrades will now unlock earlier, so you can put up a fierce fight even against the toughest opponents. This will help you put up a decent fight even if your enemy is of a higher level (yet plays in the same league). Rank up, gear up, and start dominating! 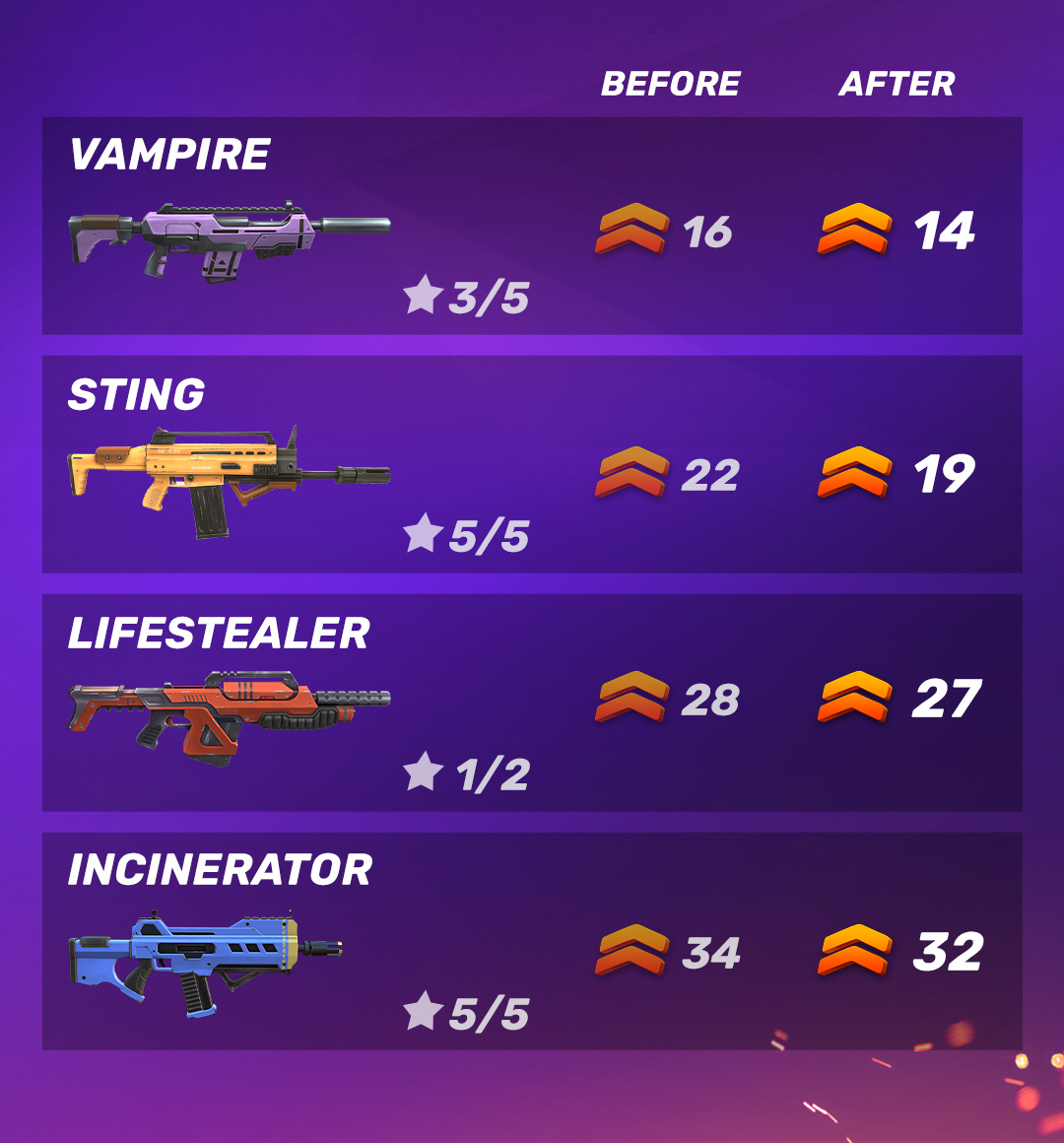 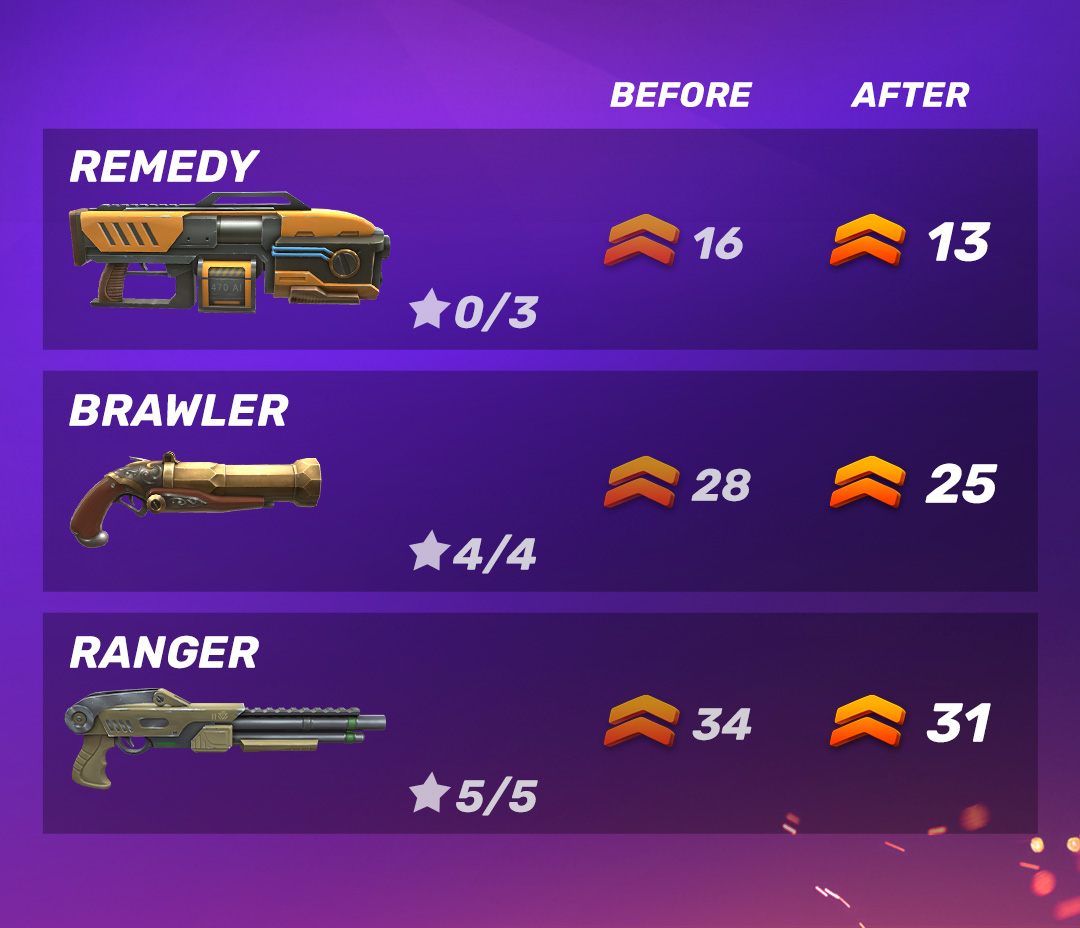 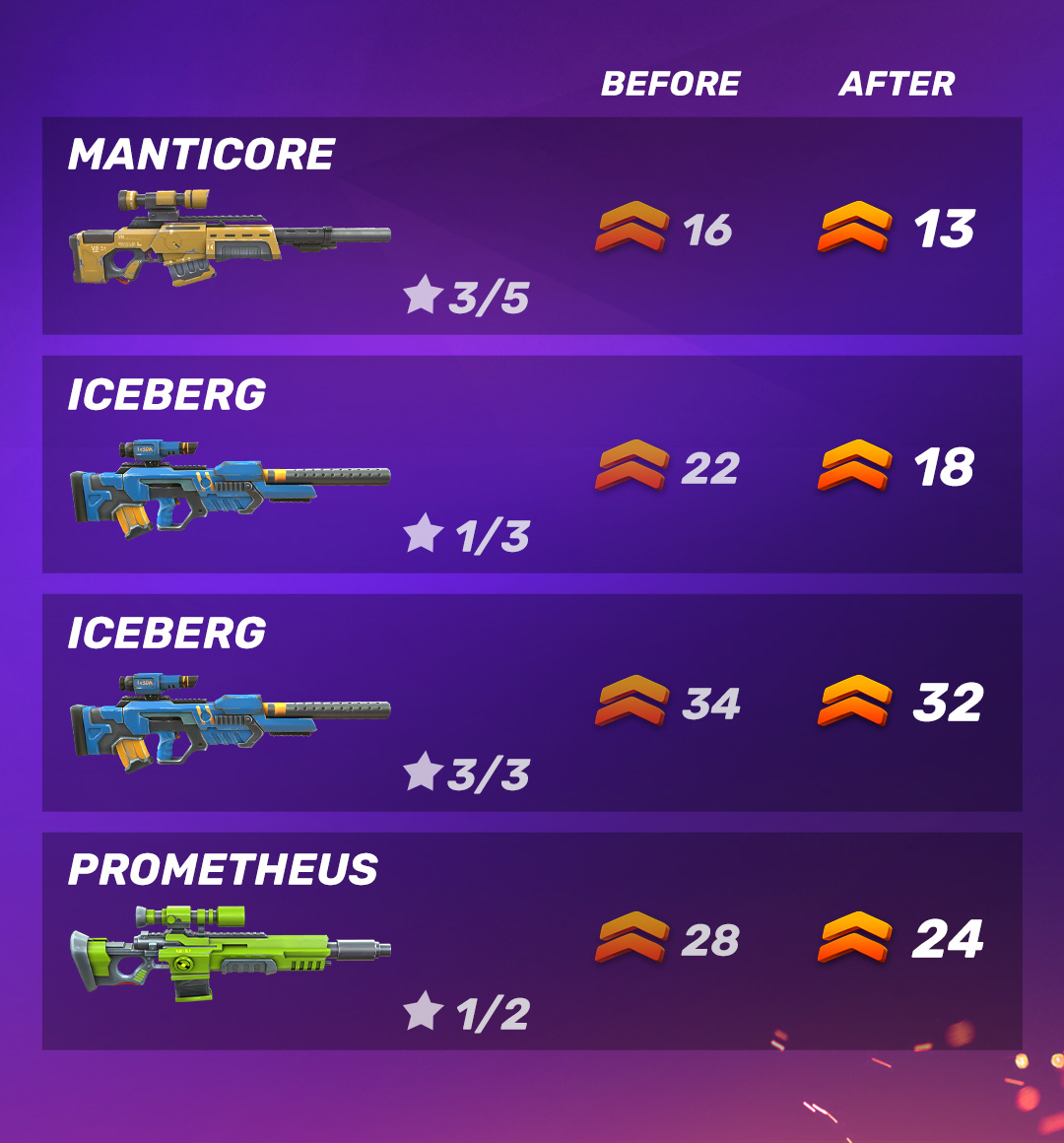 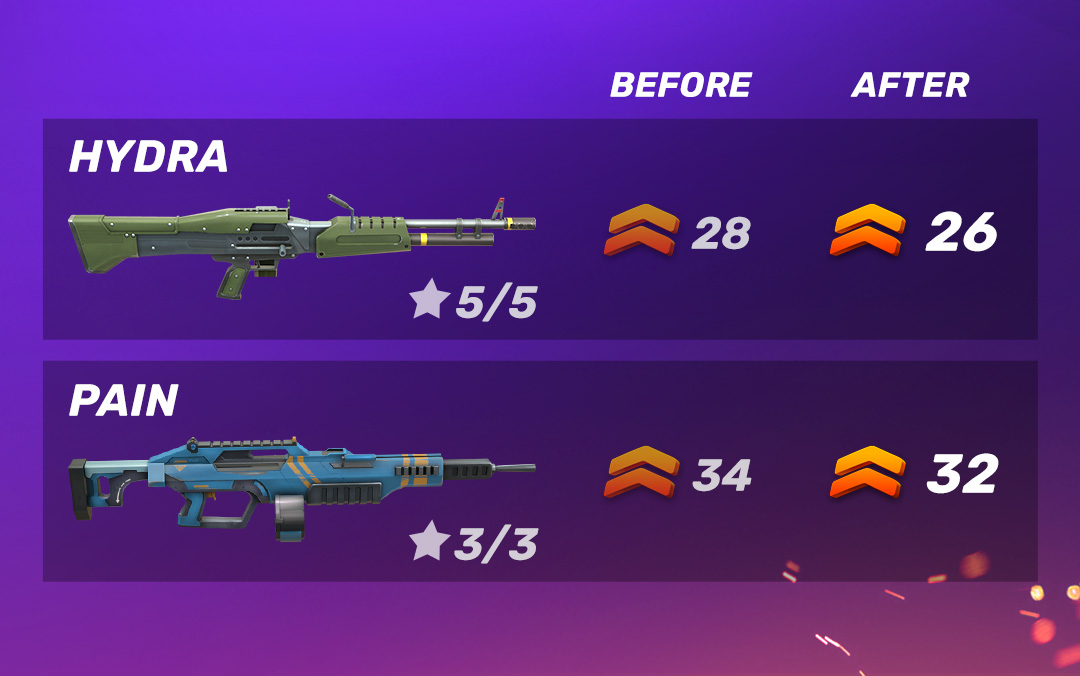 Your feedback is extremely important! The new system will make the game much more balanced and rewarding, but we might need to tweak a thing or two in the future based on your feedback, so don’t be surprised if we implement some changes later on.