Guns of Boom Classic is here! Update 24.0 brings many changes to give you the stable, predictable Guns of Boom experience you know. We want to give the game back to you, our players, and bring back the classic Guns of Boom. Check out what we’ve done to make it all true

To start things off, from now on your Battle Coins no longer get converted at the end of each season - they transfer between them. This means, you can save up all you want, and then use your Battle Coins for something you really want down the line.

4-gun loadouts are back too! You can now add 2 extra weapons to any loadout of your choice and use all 4 weapon types in one loadout. Keep in mind that spec perks will only affect that spec’s primary weapons in your loadout. For instance, if you’re using the Sniper spec as a basis of your loadout, the spec perks will not boost your machine gun or shotgun, but they will boost your assault rifle and your sniper rifle, just like before.

You don’t have to equip 4 guns in all of your loadouts. It’s up to you to decide which loadouts need the additional guns, and which ones can be effective with just the two primary ones. Having several 2-gun loadouts can be better than one 4-gun loadout and vice versa.
Just remember to take into account the specialization of your loadout and that it doesn’t affect the additional two guns.

This mechanic applies to esports loadouts as well.

We’re also going to have longer seasons starting from this one. This will give you a chance to get all the rewards you want and provide some additional stability for your gameplay experience. This season will last for 60 days and will offer 80 ranks of Battle Career.

And we’re really boosting Battle Fair rewards. Now, there are three Battle Fairs in each season, there are more weapon and gear fragments in each fair, and they are a lot easier to get.

Finally, longer seasons mean a greater number of brawls! Now, each season will feature 9 weekend activities instead of 6. The brawls still don’t affect your profile stats, but they can give some neat rewards! 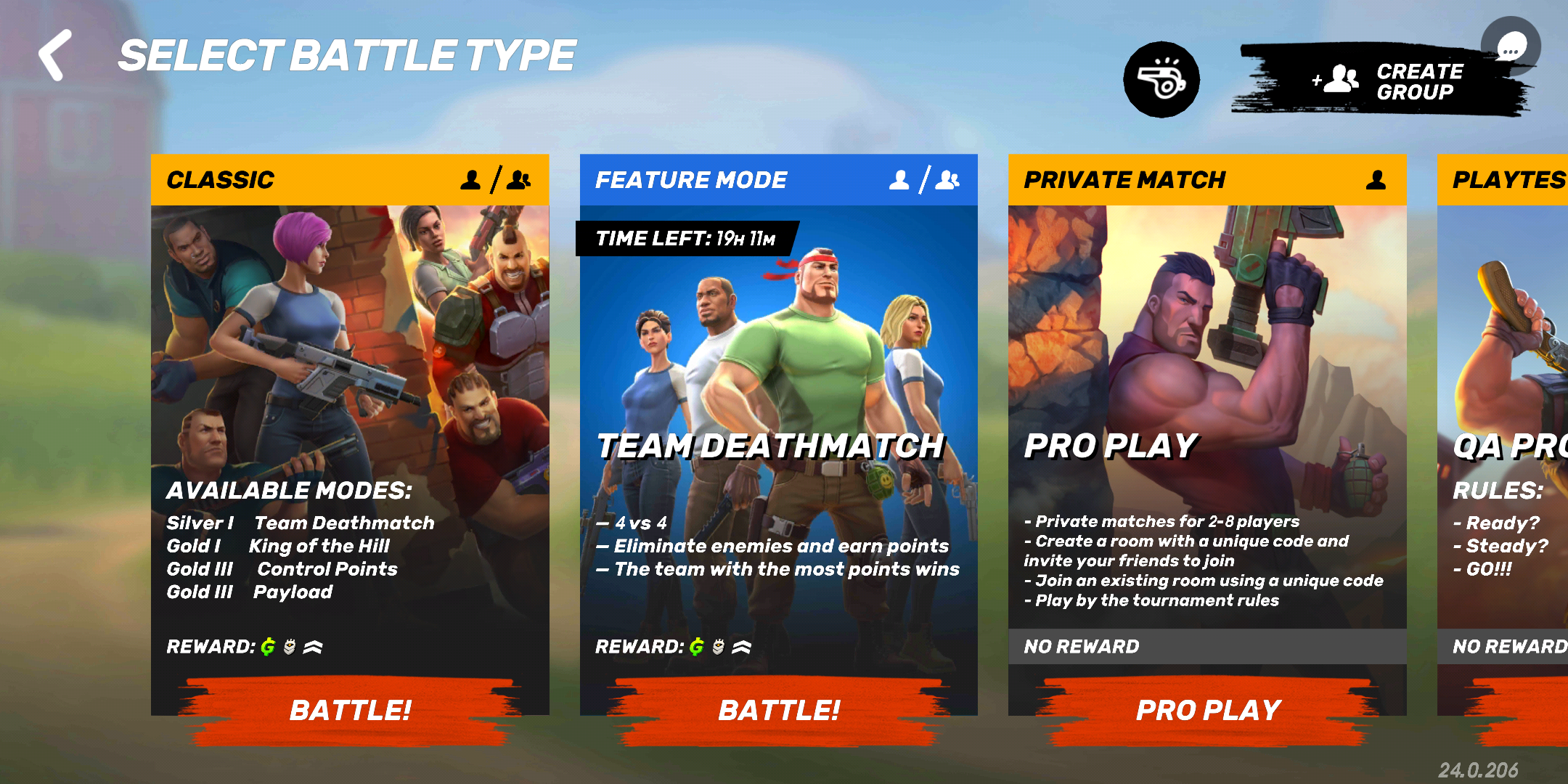 It’s fun to play all the various game modes in Guns of Boom, but sometimes you want to hone your skills at one of them and just play it over and over again. Now you can with Featured Mode! For 5 days each week, you can play one of the iconic game modes all you want - the maps may be different, but the mode will be the same.

Another thing you might notice is that in classic battles old maps will sometimes have new game modes on them. For instance, Wild West: Saloon and Paradise Island were strictly King of the Hill, but now they’re also available in TDM mode.

So enjoy the variety in classic battles, and the certainty of a guaranteed game mode in Featured Mode!

This time around, our improvements touch upon different areas, and gear stats is definitely one of them. We’ve made some changes to Chopper, Exorcist, Undying, and other items. Check out the balance patch article for full detailed and developer commentary.

We’ve removed one of the maps from the game. Not forever, just for a couple of weeks to give it a proper facelift - Mexico: Church. It’ll be back for the game’s birthday this month with improved visuals and all that!

Plans for the future: PTS

As a part of our long-term commitment to improve stability and bring transparency to the game, in the future we will introduce GOB PTS - Guns of Boom Public Testing Server. You will be able to personally test out new changes on the PTS and give us feedback, and we will strive to fix problems that arise before the update goes live.

Despite all the major changes in mechanics, we’ve also fixed some nasty bugs. Take a look at what we’ve done.